Maria del Rocio Mendez, better known as La Santera, is a key piece of the Santa Blanca Cartel’s influence operation. Growing up Catholic in Mexico, she was obsessed with the martyrs of Roman times. She convinced herself that it was the Church’s responsibility to cleanse the world of heretics.

When she was in her teens, she learned about Santa Muerte and became immediately fascinated by the belief that followers must repay Santa Muerte for their good luck or face punishments. Maria found herself drawn to the fact that many of Santa Muerte’s worshippers follow her in fear. El Cardenal, head of religion and leader of Santa Blanca’s influence arm, found Maria leading her own Santa Muerte sanctuary. Maria had grown a sizable following. El Cardenal admired the way she used fear to manipulate her followers, and introduced her to cartel head, El Sueño. El Sueño enlisted her to share the message of Santa Muerte throughout Bolivia, and to use the fear she instills in order to keep the civilians in line with Santa Blanca Cartel’s interests.

Sam Strachman, the narrative director, had this to say about La Santera:

"If El Cardenal is the light, generous side of Santa Muerte, then La Santera is the dark, hedonism. She’s taken this Saint and twisted her into something sinister for Santa Blanca. She’s managed to convince her followers that if they want a spot in the afterlife, they must kill the cartel’s rivals. Through La Santera, the Santa Blanca Cartel manipulates Bolivian citizens’ fear and religion to strengthen their influence. She is an important, yet dark, source of power for the cartel’s operations."[1] 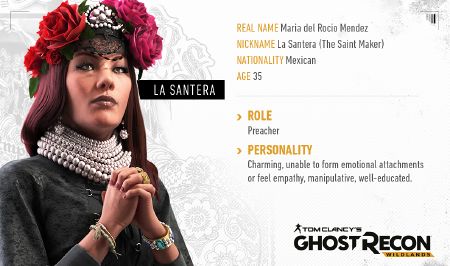