Karen Bowman is one of the Characters in Ghost Recon Wildlands.

She will help the player by pointing out missions and side ops. She is the head of operation Kingslayer. When you have defeated at least two operations heads Pac Katari will claim that his agent has a location on El Sueno. Upon further investigation the agent is dead and Bowman is under attack. She says Pac Katari has betrayed and El Sueno is at his mussoliam. When you confront El Sueno, Pac Katari is dead and El Sueno is on the ground.

There is two possible outcomes for Bowman. If you have destabilized only two operations she will get a call from the CIA telling her El Sueno has made a deal to sell out other drug and terrorist groups. She however will refuse and execute El Sueno. In this ending the rebels have fallen apart and Unidad has been bribed by another cartel. She herself is locked up in a mental institute.

If you fully destabilize the Santa Blanca Cartel she will arrest El Sueno and continue serving as a CIA operative.

She had a very close relationship with Ricky Sandoval who was tortured and killed by El Sueno, Yuri and Polito. This could be why she decides to shoot El Sueno in one of the game's endings because of their closeness.

Your squad will have a conversation about Edward Snowden, the real life whistleblower bringing up her history, 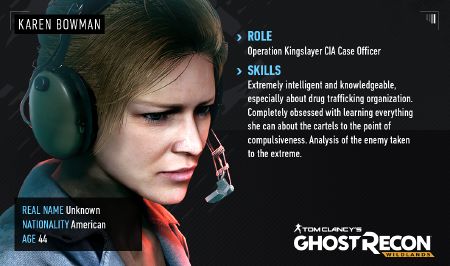